A while ago I was looking for more information about the Dunera and what happened aboard and during trips.

I knew a little about the “Australian connection” and The Dunera Boys, but had no real indepth knowledge. I think the article below, found out on the web on the website Their Voices Live On – Jewish Life in Themar, says quite a bit that needs to be known 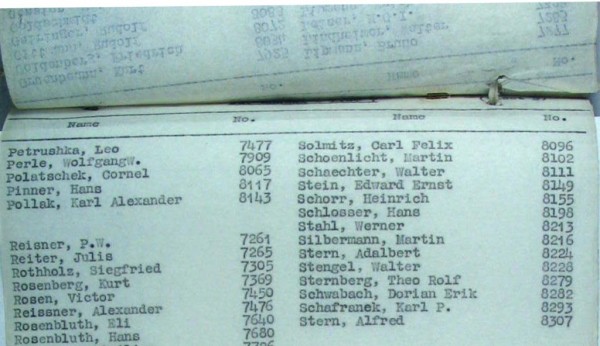 The ship’s crew — 309 poorly trained soldiers — brutally searched and looted the internees’ luggage of up to 80 lbs., while the ship’s commanders, Lieutenant-Colonel William Scott and First Lieutenant O’Neill, either stood by indifferently or actively participated.

The ship left Liverpool at midnight. Callously indifferent to the fate of the men, the British government allowed the Dunera only one destroyer escort —  this but eight days after the sinking of the Arandora Star. Less than 24 hours out of Liverpool, German submarine U-56 attacked — a torpedo hit the Dunera with a loud bang but did not explode. “A second torpedo was fired,” recalled Peter Eden 70 years later in a BBC interview, “and because the waves were heavy, the ship went up just as the torpedo passed underneath.”

The 57 days of the voyage were a nightmare of inhuman conditions and brutal mistreatment. The lower decks of the ship were jammed, and men had to sleep on mess tables or on the floor. As one refugee, A. Abrahams, recalled: “For weeks, hatches were kept down. Neither daylight nor natural air ever reached the decks. . . the upper parts of the ship, where one would have been in the fresh air, were absolutely out of bounds, being barred by barbed wire and sentries with bayonets.” Only ten toilets were available which meant long queues and ‘toilet police’ who would call up people as vacancies arose. “Men slept on floors and benches,” recalled Peter Eden, “and if you wanted to go to the toilet at night, you were walking on bodies.” Robbed of their luggage, the refugees had but the clothes on their backs; most of them had no toothbrush, toothpaste, comb or soap. Later, the guards gave one piece of soap to every 20 men to share for 2 weeks but this was hardly enough to keep clean. If an internee became ill there was a half-hour to see the doctor. Innoculations were non-existent. Food consisted of smoked fish, sausages, potatoes and a spoonful of melon and lemon jam a day; however, the bread was usually maggoty and the butter rancid.

The crew treated the refugees with extreme cruelty. The internees remained uninformed of their true destination until their own knowledge of geography and navigation by the stars — and arrival in a western coastal port of Africa — made further secrecy impossible. The crew searched the men daily, threatening them with loaded rifles fixed with bayonets. If guards found any vital medications, such as insulin, they threw them overboard. They also threw false teeth away, confiscated  razors and shaving utensils  and threatened men who hid their razors or were clean-shaven with detention in the bunker. Any valuables, hidden food, or Jewish religious vestments, phylacteries and prayer books were confiscated and either kept or thrown overboard. Beatings were daily. Staff Captain “A” Branch, who boarded the Dunera in Melbourne, reported as follows:

Two internees died during the two-month voyage: Hans Pfeffen was sick when he boarded the Dunera at Liverpool and died in the ship’s hospital; Jacob Weiss committed suicide. Weiss had hoped to save his family from the Nazis in Europe and after 12 months of work and ultimately attaining immigration documents for himself and his family, he was arrested, interned and forced aboard the Dunera. When the guards on the ship found his immigration papers, they tore them up in front of him. Distraught, Weiss jumped overboard and drowned.

Prior to arrival in Australia, the crew ordered the internees to shave off their beards, providing the 1600 men with 8 razors to do the task. The ship reached the Port of Fremantle in Western Australia on August 27 and Port Melbourne on September 3. At Melbourne, two groups disembarked: the 251 German and Austrian “A” Category internees whom the British government regarded as dangerous or potentially dangerous due to their political affiliations, along with 94 Germans and 200 Italians whose political affiliations were seen as “doubtful” since they were members of the Fascist Party in England. These men were interned at a camp at Tatura. Those who remained onboard were mainly refugees of Nazi oppression and included Julius Kahn and Adalbert Stern of Themar.

Around 10 o’clock on the morning of September 6, 1940, fifty-seven days out of Liverpool, the Dunera entered Sydney Harbour. The atmosphere was tense: on one hand, the press sniffed a sensational story — in its coverage, the Daily Telegraph reported that “among the internees were parachutists, other prisoners of war, and hundreds who had been carrying out subversive work in England.”  On the other hand, the first Australian to board the ship, medical army officer Alan Frost, was appalled by the conditions that greeted him. His report led to the court martial of the officer-in-charge, Lt. Colonel William Scott. For the weary internees, “some in heavy overcoats, hats, others with summer wear having lost everything else, some orthodox Jews in their traditional black garb and hats,” they didn’t much look like spies as they left the ship. 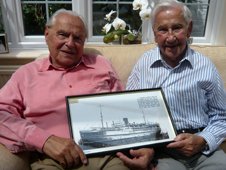 Yet, thinking back on the ordeal of the Dunera 60 and 70 years later, the “Dunera Boys,” as they have come to be called, have on balance a measured judgment of the action of the British government. Peter Eden and Willy Field, interviewed by the BBC on 10 July 2010, both say that they “bear no animosity towards Britain for having deported them in the first place and maintain that they were grateful to the nation for having saved their lives in the first place.” When offered the chance, both chose to return and fight in the British armed forces, Mr. Eden becoming a counter-intelligence officer and Mr. Field a tank driver. For his part, Horst Jacobs, President of the Hay-Tatura Association, said: “We who arrived in Sydney on HT Dunera on September 6th 1940 have indeed been lucky. Had we travelled in peacetime on a scheduled P&O liner, our shipboard friends, who became our extended family, would have been but acquaintances; we would have been more shallow and narrow-minded. The experience was a great leveller — we were all equal in misfortune.”

One aspect of the Dunera experience did live on: despite the horrific conditions on the ship, many internees were able to preserve some semblance of intellectual life onboard. Professor Peter Meyer, for example, composed a mass and organized a choir to sing it. Debates and lectures were held on a wide range of subjects: music, economics, literature, language, geography and agriculture among other subjects. As the Jewish internees came to terms with life in the internment camps, first at Hay and later at Tatura, intellectual activity was to play a major role in their lives. 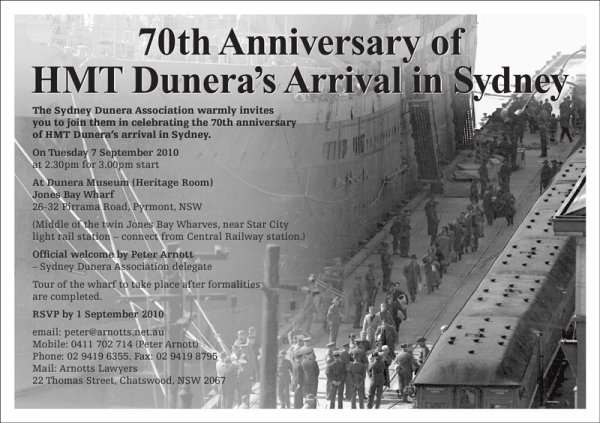 With thanks to Caroline Harris, UBC, for development of the HMT Dunera story and its relationship to the Jewish men of Themar.
See also:
70 Years After Dunera.
Enemy Aliens & Internment in England
FInding Julius Kahn.
HMT Dunera on Facebook.
BBC News, “The Dunera Boys – 70 years on after notorious voyage,” 7 July 2010.